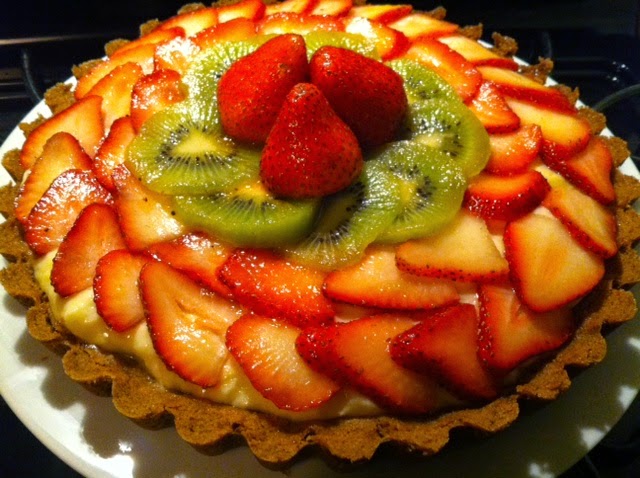 Fruit Tart with Momofuku Corn Cookie Crust. AEC 2014
I think Momofuku is awesome!  When Momofuku Milk Bar was at Emporiyum-Baltimore a few months back, I was all over the table...trying stuff...asking questions...I had to have been annoying the hell outta somebody.   The Corn Cookie was on point.  It was soft, buttery, and the corn flavor really hit you in the face.  The corn flavor was driven by the corn powder produced by Milk Bar.  "Ingredients: freeze dried corn ground into a powder".  Of course, I picked up a bottle with plans to make my own.  They came out ok.  I didn't get the texture right.  THEORY: I think my hot kitchen made the butter melt too fast.


Anywho, I made way too many.  Ok, I was trying to show off to my friends with these amazing cookies.  However, when they didn't turn out quite right, I went to Plan B...give them hugs :-)  I ended up freezing the remaining cookies.  I knew I could do something with them.  Jazz up a parfait, ice cream cookie sandwiches...then it hit me...cookie crust for Ayla's B-Day Fruit Tart.  Long story short: the girl loves fruit tarts.
I never made my own cookie crust from a batch of cookies I actually made.  What have I been doing with my life?  So, I looked up some tips online.  I didn't have that many cookies to mess up.  It was simple enough.  Grind cookies, combine with melted butter, press into form, and bake.  I was able to get a little less than 2 cups of cookie crumbs.  I actually did this the night before I made the tart.  I hesitated adding butter at all.  The crumbs kind of clung to themselves without the addition of anything.


Heavy handed me added 5 tablespoons of melted butter.  Yeah, ended up being a little much.  In hindsight I could have added some flour to dry it out slightly, but I didn't want to take away from the cookie flavor.  Perhaps, adding more corn powder could have helped, too.  I added some raw sugar.  I thought it would add an interesting texture contrast.


So, after a few minutes in the 350°F oven, the crust started to bubble like crazy.  It actually started to lose the form that I had so painstakingly worked to achieve.  I think I helped it some by removing it from the oven and flattening out the bottom again.  I lost some of my edges.  The pastry cream sat more on top of the crust vs. inside of it.


Overall, not the worst fruit tart that I'm had.  The crust was a little hard which I actually liked.  I didn't put a barrier, like chocolate, between the crust and the pastry cream, so it did soften up a bit.  Next time...and there will be a next time, I could just press the crumbs with no additional butter in the pan.  What if I just put the cookie dough in the tart pan?  I lost the texture I was looking for from the raw sugar.  Folding in some course sugar should work better.  I think with only a few minutes in the oven, I might make a better tart next time...lessons learned.